Sorry, this product is no longer available, please contact us for a replacement.

The Eaton® 9390 is a double-conversion uninterruptible power system (UPS) that resolves all utility power problems and supplies clean, continuous, uninterruptible power to connected equipment. Whether you're selecting a UPS for a branch office, manufacturing floor, medical facility, or data center, there's a 9390 model that delivers just the right combination of performance and price for your needs. 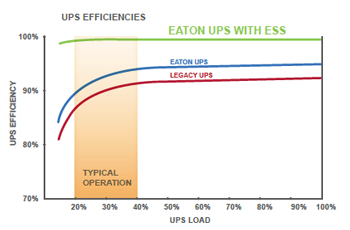 The 9390 has delivered excellent energy efficiency since its introduction to the market, helping facilities save thousands in energy costs over traditional UPS designs. Now with the available Energy Saver System (ESS), the 9390 achieves over 99 percent efficiency no matter how large or small the load. This additional energy savings is achieved through advanced power core technology, and continues to provide the load with maximum protection. Unlike traditional "eco" modes, ESS is not just a utility bypass.

In addition to conventional (208V and 480V) voltage capabilities, the 9390 now has the ability to support direct-connect 400/230 Vac for powering directly to the IT rack. This capability allows for the 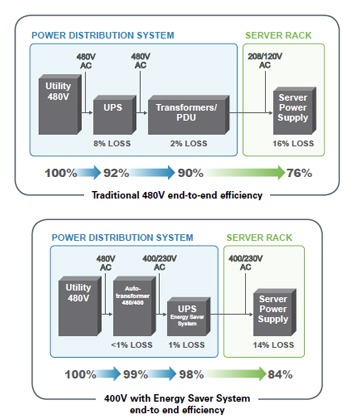 deployment of a UL/CE rated UPS that can protect and distribute 400/230 Vac directly to IT racks without an additional stepdown transformer. Some of the efficiencies and benefits of this alternative voltage powering are:

The 9390 supports up to 160 kVA to deliver power protection for small branch offices to large corporate data centers and communication networks. Up to four equivalent 9390 modules can be paralleled for additional capacity or redundancy, without having to utilize a central bypass cabinet. In all paralleling configurations, each UPS module operates independently yet is completely synchronized with the others. Parallel UPS modules can provide N+1, N+2 or greater redundancy.

Eaton's patented Powerware Hot Sync® technology enables multiple UPSs to share the load equally, eliminating the transfer time when shifting the load from one module to the other. The load share control algorithms maintain adjustments to variations in the output power requirements.

When two or more UPSs operate in parallel for capacity and redundancy, Hot Sync addresses the two primary concerns of load sharing and selective tripping. To address these concerns for reliability – the degree of autonomy and the complexity of implementation – Hot Sync combines digital signal processing and an advanced control algorithm to provide automatic load sharing and selective tripping in a parallel system, as well as complete autonomy of the modules and a skillfully simple implementation.

This two-module system shown below can be configured as 160 kVA N+1 redundant (320 kVA capacity with 36-inch tie cabinet). The width of this configuration is a compact 164.6 inches. The 9390 achieves optimum reliability and flexibility with the following design features: 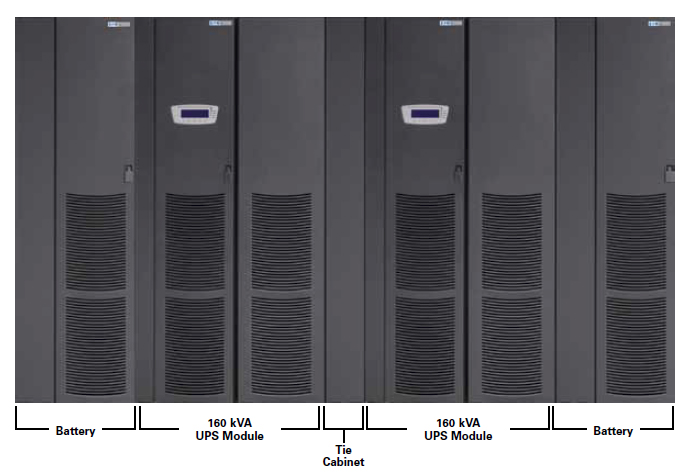 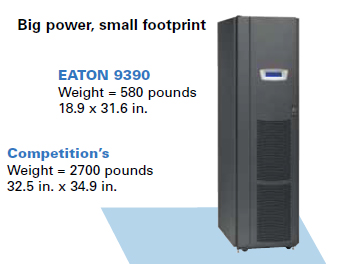 The 9390 offers the smallest footprint of any UPS in its class—35 to 50 percent smaller than competitive units. Cabling can enter the UPS from either the top or bottom of the cabinet to provide easier and flexible installation. And since the compact 9390 cabinet can be installed against back and side walls, you have more location options, installation is fast and easy, deployment cost is lower, and you save valuable data center space.

At $.30 per pound, the 9390 averages a cross-country freight savings of over $630. With a transformerless design, Eaton UPS solutions meet or exceed virtually all floor loading standards. And with this lower weight, units can be moved without heavy capital equipment and can fit in all standard freight elevators.

The 9390 is perfect for retrofit operations. When an existing UPS is exceeding capacity but has no room to expand, or when the service contract is expiring, the existing UPS can be removed and replaced with a 9390 that offers more power in less space.

Being a pre-wired, integrated module, the 9390 saves time and cost of installation and cabling expenses because of standard top or bottom entry design. And with front access, the 9390 can be placed in a corner or against a wall—easily available for service and saving valuable space. 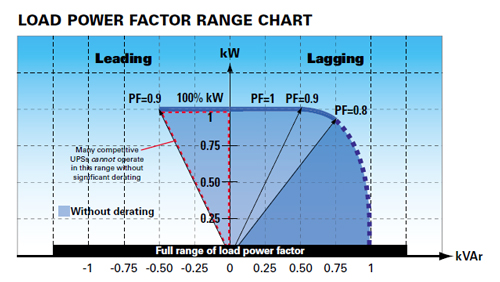 Electronic devices and UPSs are built with some components that are non-linear. When voltage is applied to a circuit constructed of non-linear components, the circuit may not respond linearly (current may not follow the voltage in a linear manner). These components may even create frequencies other than the fundamental applied frequency (60 Hz).

These frequencies (harmonics) occur in odd multiplies of 60 Hz. The degree of occurrence is called total harmonic distortion (THD). If the power source can't respond to all frequencies demanded by the circuit, then further distortion of the applied voltage may occur—creating more complication. Every UPS produces a level of harmonics. Unchecked, harmonics can reduce overall power factor, cause sensitive devices to malfunction, prematurely age equipment, and cause screens and displays to flicker.

To avoid these negative effects, the 9390 uses a special input circuit that keeps current THD at less than 4.5% at full load— without compromising efficiency. As a result, the 9390 transfers maximum power between the source and protected load and is exceptionally compatible with multiple power sources, especially auxiliary generators.

Power factor (PF) describes the slight phase shift between voltage applied to a circuit and current that the circuit draws in response to the applied voltage. The maximum power factor possible is unity (1.0), or no phase shift between the voltage applied and the circuit current response—maximum transfer of power between source and load. However, in the real world, the UPS must be able to accept power from and deliver power to circuits that have a wide range of power factors.

On output, the ultra high-speed switching pulse width modulation (PWM) inverter enables the 9390 to provide its full rated power capability to the load, down to 0.9 leading power factor without de-rating.

Due to the 9390's built in high-efficiency capability, it operates in a consistent, efficient status without compromising power protection. Even when presented with the most severe power problems, power output remains stable with the 9390. Output voltage THD is held within two percent of nominal specification for linear loads, within five percent for non-linear loads—making the 9390 ideal for supporting equipment that is sensitive to a distorted voltage input as a result of harmonic loads. In the event of a utility power failure, there is no delay transferring to backup power.

The 9390 UPS offers innovative technologies to maximize the health and service life of its internal and external batteries: 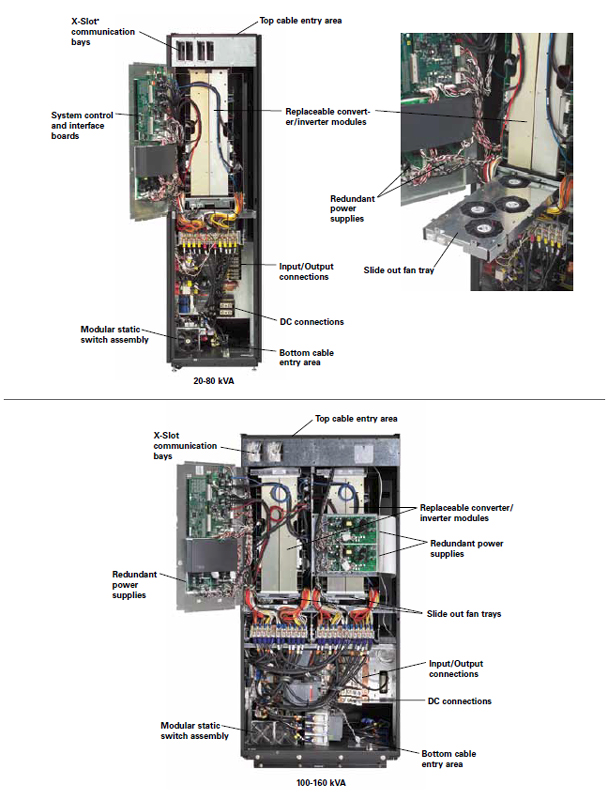